Here’s the issue, based on historical statistics:

More weak companies will fail once an economic recovery has started than will have failed during the preceding recession. Many of their competitors will miss key opportunities to gain market share because they’re too busy being protective. 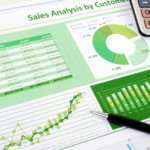 How does this happen? Should you be concerned? Please read on.

All companies struggle at some level during a recession. All, or most, pull in spending, cancel commitments, slow down payments to suppliers, try harder to collect customer accounts, delay hiring, initiate layoffs, and so on. Some companies fail during this period because they do not have the resources to survive a drop-off in sales, but many other weak companies continue to survive because their stronger competitors are too busy protecting themselves to take advantage of the weakness they could find if they had more aggressive marketing programs instead.

Once an economic recovery begins, however, things change. The strong company begins to assert itself, launching new initiatives, increasing marketing spending, hiring into positions previously deferred, and generally flexing its muscles. The weak company that was just holding on earlier now must compete against an apparently resurgent competitor, when it was barely holding its own on the way down. Because it does not have the resources in reserve, there is now for all to see a clear distinction between it and the stronger competitor –

In this scenario, customers of the weak company are easier to win over to the stronger competitor. Suppliers lose patience and are no longer willing to ship and wait for delayed payment, particularly as their business from strong companies is now growing again. The weak company’s troubles worsen as a result, and their thin fingernail grip on survival is no longer enough. They fail with greater frequency as the economy improves. Result: more companies fail on the way up than the way down.

The recovery is underway, and it’s the slowest recovery in anyone’s memory. Lots of opportunities for weaker companies to fail in the months ahead.

If you are unsure of your next steps in this market, either because (1) you are concerned that your financial position may have dangerously weakened your company, or (2) you may not be making the right strategic moves to assert your position as a stronger company, it’s time for a strategic re-look at your company and your market. Before it’s too late.