Pick up any business newspaper today and someone will be opining on the interest rate yield curve. Is it going up, going down, reversing, inverting, or just resting quietly? You’re busy running a business that isn’t a bank, so what’s that all about? Why do you care? What should you do, if anything? This post – longer than most – is the what, the why, and what to do about it.

First, the what. The yield curve is simply a chart that plots at given points in time the interest rates of bonds of equal credit quality but differing maturity dates. Typically it is US Government debt that gets talked about, because that drives interest rates for much of the mortgage debt and bank lending in the US. In effect it’s the benchmark from which lenders determine the interest rate on the money they lend to you and me. 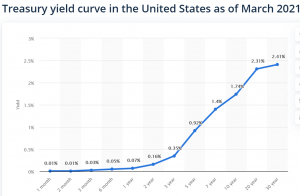 Why do you care about this curve? It impacts the interest rate you will pay on borrowed money. Short term lines of credit, real estate mortgage, long term loans. All lenders pay attention to the yield curve because it reflects the interest rate trends they expect to see over time, which will impact their profit on the money they lend you today. Since most banks get much of the money they lend out from short term commitments of their customers – savings accounts, CDs, and the like – they take a risk in lending that money for a 30-year mortgage that sometime in the future they’ll be paying more for those savings than they’re earning on your mortgage. That’s their risk of borrowing short and lending long. Normally the yield curve expectation is that rates are higher for long term lending than for short term lending (because of the higher risk that comes with their longer commitment). So maybe you can get a 1-year credit line for 4% but a 10-year term loan may cost you 5% or more to compensate the lender for that risk of waiting to get their money back.

So what if the yield curve “inverts” or shows that long term rates are lower than short term rates? The experts will tell you that means trouble ahead – perhaps a recession or financial crisis that will result in a lowering of demand, followed by a lower of rates – driven by the Fed typically – to help the economy by encouraging borrowing. Banks these days try to alleviate their risk by doing more lending at variable rates that will adjust to the market periodically. This has happened notably in the mortgage market where options include both fixed rate and variable rate loans, with the variable rates starting lower because the lender has more security that they won’t be caught with a losing loan down the road. Your 10-year loan at a variable rate could start at 5%, creep up over time to 6% or 7%, but have a built-in provision that it will never go below the 5% that it started with. Either way, bank wins, you lose.

OK what should you do about it? First you need to have a sense of your capital needs, ideally over the next 5-10 years. (Yes, that means a plan!) Next, how much of that will come from retained profits, from new equity investors, and how much will need to be borrowed. Is that borrowing going to pay back in a short period of time or is it about long-term capacity that will pay off handsomely but not tomorrow? That thinking should drive your borrowing strategy.

Money borrowed today will cost historically low rates to start. Based on today’s yield curve you should borrow your long term money at rates as close to fixed as you can get, e.g. bonds, meaning that you keep today’s rate for as long as you can, and the reset benchmarks are as infrequent as you can get, because resets down the road will cost more, based on today’s yield curve. Now, will the curve stay normal or invert during the term of your loan? Well, if you can answer that, you should start a bank.

We are Your CFO for Rent.®